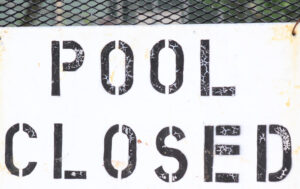 Recently during an episode of the BLK News Now! YouTube Vlog “FalCo Files,” I was presented with a question about my opinion of an annoying stereotype. I shared, that in my opinion, one annoying stereotype is the “myth” that I can’t swim because of a pervasive stereotype that Black people can’t swim — or fear water because we will allegedly do anything to avoid getting our hair wet. I resisted leaning into this “stereotype?” because I know quite a few Black people who can swim, including myself from a young age. But a revelation from BLK News Now! Editor Corey that he cannot swim (and fears the ocean) was the beginning of an eye-opening look at how common it is that Black Americans can’t swim. Upon Corey’s admission — and mention of a study supporting this age-old belief that many Black kids do not learn how to swim, I did some digging and the results were a bit unsettling.

First, I began asking around; I surveyed several people. I discovered that the majority of Black people I surveyed over the age of 50 admitted they didn’t know how to swim. Their reasons mirrored each other; according to them, they did not learn how to swim because there was no access to a home or community pool growing up. On top of this, they couldn’t teach their children and didn’t feel compelled to do so, particularly because they didn’t have frequent access to a pool. Some also voiced being too afraid to learn to swim due to fear of drowning.

The answers I received pushed me to explore this phenomenon even further. There are actually a number of studies on Blacks and swimming, and I found that in the U.S., 64% of Blacks didn’t know how to swim, compared to 40% of whites, and 45% of Hispanics. Stats like these are not just limited to the U.S. According to Swim England, the sport’s governing body, 95% of Black adults and 80% of Black children in England do not swim, and only 2% of regular swimmers are Black.

While personally surveying Blacks about swimming, I was asked “why is swimming so white?” Theories on this racial disparity ranged. Among them are the beliefs that swimming was discouraged by Blacks, that the black community stigmatizes swimming as a “white sport,” the transfer from public pools to private pools and private swimming lessons, and a history of segregation and exclusion in the U.S. One study questionably suggests that Blacks make excuses not to swim, likely due to not knowing how. Those excuses include not wanting to wet our hair, having a period, water temperature, body image, etc. But the theories on why Blacks can’t swim in the U.S. are largely due to systemic racism limiting many Blacks access to pools and swimming lessons.

After Jim Crow, when cities where mandated to integrate public pools and beaches, some whites resisted and responded with violence. To some whites, swimming was perceived as a white leisure or luxury. Some whites felt that swimming would be safer, more harmonious, and more sanitary without Blacks. Owners of integrated pools in some areas limited days that Blacks could swim and audaciously sanitized pools before whites used them. Some Blacks that attempted to integrate and swim were met with humiliating and cruel violence. Whites threw nails at the bottom of pools in Cincinnati, beat them up in Philadelphia, and poured bleach, and even acid in pools in St. Augustine, Florida. Insane, right?

Instead of integrating pools, many cities over time defunded public pools in urban communities, cutting minorities from using public swimming pools and beaches, leaving limited access to pools, or clean facilities. Pools that where left in urban communities had low maintenance and attendance, aging infrastructures, health department code violations, and, in many instances, municipal budget reductions that impact operating capacity and capital improvements, according to the CDC in 2016. This made me think back to seeing pools in urban communities and even pools portrayals in movies in urban communities that had pools with water never filled or dirty pools, some filled with debris or water that turned green from fungus because they were never cleaned and used.

Sadly, currently there are still reports of attempted discrimination at pools. For example, according to a story by the New York Times in 2009, they reported that a owner of a private swim club in Philadelphia, excluded Black children attending a Philadelphia day care center, saying they would change the “complexion” of the club.

According to the CDC analysis of drownings, Black children in the United States are five times more likely to drown than White children. Like many of the reasons cited earlier, they attributed these factors to having limited to no access to swimming pools, the desire or lack of desire to learn how to swim, all in which can influence drowning risk and contribute to the racial differences in drowning rates. (CDC, 2018)

But in 2022, I can’t help but wonder what is the excuse now? Pools are no longer segregated. While there are still limited access to pool especially in urban and rural areas, they are relatively within reach. There are also low-cost and even free programs that offer swimming lessons to all. In my opinion, there is no excuse for Black women to get their hair wet. It is true Chlorine is not great for anyone’s hair, and especially true for African hair or relaxed hair, but there is endless information available on how to protect hair and take appropriate precautions before swimming.

There is a bona fide history that explains the historical issues that have contributed to the disparity gap between Black swimmers and other races. As we have overcome these hurdles, it’s important to address the persisting challenges, if any, that continue to perpetuate a harmful disparity that disproportionately puts Black children at risk of drowning. Blacks must be willing to go out of their comfort zones and think of swimming  as a life saving skill. (Studies also showed that 70% of black children want to swim, so why not allow them to, yet also taking the percussions that they do so safely. It is important to think of swimming as also a recreational skill, much like riding a bicycle. When a parent stigmatizes swimming or discourages a child from participating in swimming, this stereotypical life threatening cycle continues.

After my Q&A with Editor Corey, I was amazed to find out that there was a disproportionate number of Blacks that couldn’t swim. The reason was largely due to access to pools, beaches and swimming lessons, which was due mainly to systemic racism. The times are changing, access to swimming lessons and pools are more readily available. Swimming is not a white activity. Like the case in 2009, there may be attempts to keep Blacks out of pools, but these are just baseless attempts. Not trying to swim is a win for racist that want to keep stereotypes alive.

We have made great strides in the last decade alone. In 2016, the first Black woman representing USA, Simone Manuel, won a gold metal in swimming at the 2016 Rio Olympics. More black professional swimmers leading an example and more youth swimmer shows that the tides are changing and becoming more diverse. I look forward to seeing future studies that show the racial gap of swimmers getting smaller.