Growing up in Southern California, I couldn’t help but hear the stories about the two Black girls that crossed racial boundaries by playing tennis.  Venus and Serena were inspirations to many girls living in urban communities across the world. They navigated their way through obstacles and persevered, becoming two of the best women to play in the Women’s Tennis Association.

Born to Richard Williams Jr. and Oracene Price, the family resided in Compton where they learned how to play tennis through their parents who coached them at the age of 4. The family lived in Compton during a period when the majority of Black athletes choose Football and Basketball. I remember hearing the stories of Venus and Serena and their rigorous early-morning tennis practices lasting late till dusk, and how at their young age they went outside the norms and astonished at the game of tennis. At a young age, even though Serena and Venus had not yet reached anywhere close to the peak of their potential, I felt like I was watching an era of greatness unfold when I watched them practice inside of the tennis courts at the park. There was a sense that these girls were on the path of doing something great. Venus and Serena immediately had an impact; many of the older kids flocked to the park picking up tennis as a new hobby in hopes their talents could match the Williams.

Once Venus and Serena began to compete in the minors, they excelled and shined. But the path was not easy. They were subjected to racial slurs, and chants — and according to their father it was mostly from parents of the other players. Through all the racial slurs and scrutiny from parents after they began to compete, the girls constantly remained vigilant. In 1991, the family moved to Florida so that the sisters could attend tennis academy of Rick Macci. After attending the academy, in 1994 Venus was the first of the two to turn pro at just 14 years old. Venus competed before Serena, which Serena has attributed her success to after watching and learning from her older sister. In an interview with Vogue Magazine, Serena said, “It made me work harder, turning me into a savage fighter. When she lost, I understood why, and I made sure I wouldn’t lose the same way. That’s how I started to move so fast up the rankings, because I learned the lessons from Venus’s losses instead of the hard way, from my own.”

Serena followed Venus a year later and turned pro, and the rest is history. Serena and Venus have faced each other 31 times in singles matches. The first in 1998 in the second round of the Australian Open, Venus won. The sisters would compete again 3 times during the finals, till the Roland Garros Grand Slam Finals in 2002 when Serena finally defeated Venus for the first time. Serena leads her sister in competition against each other with a 19-12 record. Despite their success, the sisters still encountered racism and sexism. On Sept. 8, 2018 Serena was rightfully upset regarding penalties during her Grand Slam match. She described them as sexist. After the match a Australian newspaper published a controversial drawing of Serena that was misogynistic, problematic, and some would call it racist. Situations like this, on the exterior never seemed to let the Williams sisters stumble. They continued to thrive, showing women of color that “I had to make people realize that it was okay to be Black and play tennis,” Serena told Sirius XM.

This is how @Knightcartoons and @theheraldsun in #Australia portrayed #SerenaWilliams in their publication today. And notice how they made #Osaka look like a white woman.

This isn’t about “gender”. This is simply global anti-Black white supremacy. pic.twitter.com/uoRijSfcrG

Both sisters, who are multilingual, have numerous of accomplishments under their belts. In 2002, Venus became the first Black woman who was ranked as world’s No. 1 tennis player in the Open Era. In June 2010, Serena became the 6th player to hold the No. 1 ranking in both singles and doubles, simultaneously. The William sisters have won a total of three gold medals as doubles teammates in the Olympics. Serena became the first African-American woman to win a title in Open Era Grand Slam Singles. She also became the first player in the female and male division to complete the Career Golden Slam after turning 30 years of age, and the oldest player to reach a number 1 ranking at the age of 35. “King Richard,” an American biographical film, was made based on Venus and Serena start, telling their story of how their father Richard had a plan that would take Venus and Serena Williams from the streets of Compton, California to the global stage, where they become known to world as legendary icons. The film was produced by Venus, and Serena and won several awards, including an Academy Award and a Golden Globe. 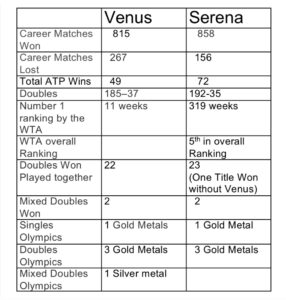 Years after two Black American, female players entered the sport of tennis and dominated the WTA, on September 2, 2022 Serena Williams played her final match at a sports club with a majority white audience, happily saying farewell to tennis, and retiring from the sport. Serena calls her departure not a retirement but evolving from tennis. Serena’s retirement, or better yet evolution, away from professional tennis will leave a void. With Venus not yet announcing any future plans of her own retirement, thinking of the day when both sisters are gone from tennis will definitely leave a gaping hole that will be hard to fill.

Still, Serena is leaving the game of professional tennis in a better place when she began. Due to the increase in both female and male Black players hoping to walk in the footsteps of Serena in part of her inspiration and motivation. Female WTA player Cori Dionne “Coco” Gauff told reporters “The Williams sisters inspired me to play tennis because I saw someone like me playing a sport with not a lot of people who look like me. I hope I can be that for other kids.” Martin Blackman General Manager of USTA Player Development said, “Now Tiafoe, Gauff and the others find themselves at the foot of the next mountain to climb. They are the new torchbearers to light the path for others as the Williams sisters lit the path for them. Progress for Black people, in and out of sports, has always been about climbing mountains. The mountains are steep, but we’ve climbed them before. We’ll climb them again.”

Thinking back to when I was fortunate enough to see the sisters train as children in the tennis courts of Compton when they had yet to reach anywhere close to their potential, it feels amazing to see where they landed. Venus and Serena reimagined the world of tennis, showing young women of color that are aspiring to become tennis players, or any athlete that’s historically dominated by White players, that they too can do anything. I still wonder after the Williams family left their mark on Compton, are children of color still inspired, and do they still go to the same park where the Williams sisters once practiced to feel the presence of their greatness? I certainly hope so, and I look forward to seeing where evolution will take the Williams sisters, and young women of color who follow in their path.