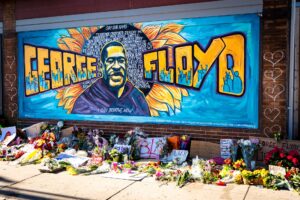 ProPublica is a Pulitzer Prize-winning investigative newsroom. Sign up for The Big Story newsletter to receive stories like this one in your inbox.

Amid the pressure, elected officials pledged sweeping changes to how officers operate and how they’re overseen.

But two and a half years later, with violent crime increasing across the country, that momentum has seemingly stalled. In Washington, support for the George Floyd Justice in Policing Act, which would have created a national police misconduct registry among other measures, withered while lawmakers passed bipartisan legislation to invest in the police. A recent House bill would award local police departments $60 million annually for five years, with few of the kinds of accountability measures for cops that progressives had advocated.

Meanwhile, in New York City, home to the nation’s largest police force, Mayor Eric Adams pledged to recruit officers with the right temperament for the job, weeding out overly aggressive cops while taking on violent criminals. He has since staked his mayoralty on combating crime, empowering the police to pursue a range of functions, from sweeping homeless encampments to relaunching a controversial plainclothes anti-crime unit, which had only recently been disbanded over criticisms that it disproportionately targeted Black and Latino New Yorkers and was involved in many police killings.

To make sense of these shifts, I called Elizabeth Glazer, one of New York’s leading experts on criminal justice. For more than two decades, she’s been working in law enforcement and policymaking circles, first as a federal prosecutor in Manhattan, where she leveraged federal racketeering laws to put shooters and their enablers behind bars, then as a government official, including the deputy secretary for public safety under New York Gov. Andrew Cuomo. Most recently, she served as the director of the Mayor’s Office of Criminal Justice during the Bill de Blasio administration.

This year, Glazer founded Vital City, a nonprofit dedicated to offering practical solutions to public safety problems. The endeavor is something of a call for a rebirth of civic mindedness, drawing on research that shows how communities can both be safer and feel safer if the whole of city government — not just the police — acts, including cleaning up vacant lots, turning on street lights and employing young people during the summer.

We discussed police reform post-Floyd, the role of the cops and the shifting narrative around public safety amid rising levels of crime. Our conversation has been edited for length and clarity.

From your perch, what does the legislative inaction around the police reform agenda say about the ground-level movement that was spurred by Floyd’s murder? What happened?

Two things happened: One, there’s a kind of built-in conservatism about the importance of maintaining the police. As a country, we are afraid to change policing because we are so firmly attached to the view that it is only the police that can keep us safe.

The second thing is, the movement coincided with rocketing rates of increase in shootings. Suddenly, scary violence really erupted in ways we hadn’t seen in many years. And our reflex when crime happens is, “Call the police,” not, “Make sure you have enough summer youth employment.” That bolstered the reluctance to make changes.

But I think the other thing is that “defund the police” was really a lost opportunity. It sort of had this toxic messaging. So it was viewed as an existential threat to police departments. But in fact, it might’ve been an enormous opportunity if police departments didn’t view it that way. It could have been a chance for them to begin to reshape their roles in a way that focused on their core strengths and to begin to give back to other professionals the responsibility to deal with the homeless, those with mental illness and all these other areas where their authority had kind of expanded into.

I’ve always thought that some of the reformers and even the police union would have some common ground, especially when it comes to defining what the job of the cop is.

In fact, cops have often said: “We don’t want to be social workers. That’s not our job.” So it does seem like there’s an opportunity. But we don’t start from that point because I think there’s a sense from the profession that they are under attack and underappreciated. And if you say, ‘Do less,’ it feels like yet a further attack, as opposed to, ‘How can we support you to do what you do best?’ What’s happened is that the police department, as it accretes more and more functions, occupies a very prominent role among the city agencies. But actually we’re a civilian government, we have civilian heads whose job, really, is to ensure the police are part of an integrated civic approach, ensuring that communities thrive.

You’ve been making this argument for years. Why should policymakers listen today?

The police are great at solving crimes. And that is something that only they can do, and, really, that is what they should do.

But the line between who is police and who is government more broadly has become more and more blurred, so what you see is police really taking over all kinds of civic services. In New York City, the Police Department is funded to the tune of millions of dollars to construct community centers and do community programming. They have an employment program. They do graffiti removal. They do mentoring. They have a beekeeper. All of these are civic services. Why are the police doing it?

We seem to have gotten into this strange Rube Goldberg situation, in which the police, as a stated matter, are saying, “We’re doing it in order to build trust with the community.” But it’s really a backward way of doing it and ultimately, I think, ineffective because it is hard to make friends when it is an unequal relationship. It is hard to say: “Play basketball with me. By the way, I have a gun.” Or, “By the way, on another day I may be arresting you and your friends.” It’s just the way things are constructed. But the police can build respect by solving cases. And I think neighborhoods rely upon them, and have respect for them, when they do that job they can do so excellently.

In 1999, you wrote a piece for National Affairs that argued law enforcement needed to take a broader approach to crime reduction instead of focusing on arrests and one-off prosecutions. Today, 23 years later, do you feel as though the more things have changed, the more they are the same?

I think the frustration I was expressing then was that there didn’t seem to be a connection between going back in and arresting people over and over again and saying, “OK, well now a bunch of people who have been killing other people in the neighborhood have been arrested. Before another group steps in to fill the void, is there something else that can be done?” Who has that panoramic view?

A civilian needs to be the one who has that panoramic view, that civilian being the mayor, who oversees all the different services that are produced for the benefit of a city’s citizens and weaves them together toward one goal, which is supporting the well-being of New Yorkers. The police are an important part of that, but they are not the most important part, and they are not the point of the spear. They are a civic service that needs to be coordinated and synchronized with all these other efforts, focused on neighborhoods in need and working alongside their colleagues in housing, parks, employment and all the other things that keep us safe.

At the same time, when you think about this service of last resort, meaning the criminal justice system, it’s much more than just the city. Somebody also needs to coordinate that, and it needs to be someone who has enough gravitas and connections to have players who do not report to them be willing to think together and act together for a common goal.

Is there any recognition in the Adams administration that maybe the police don’t need to be as omnipresent in every aspect of city life? Or is that point lost on them?

I mean, certainly the mayor’s campaign rhetoric was very much about dealing with upstream issues. He famously quoted Bishop [Desmond] Tutu about making sure people don’t “fall into the river.” And he’s been a big proponent on summer youth employment. The difficulty is, it’s unclear what the plan is and how it all fits together. And then, even to the extent that one thing or another is announced, how are those things doing? And do they connect to anything else that’s being done?

How do you advise policymakers who are navigating the new terrain here when politicians weaponize crime stats for political ends? Yes, crime is up, but in truth there are some neighborhoods that are feeling it disproportionately.

Crime is now and always has been highly, highly concentrated, particularly violent crime. If you look at the neighborhoods that suffered the most number of shootings today and 30 years ago, they’re almost identical. Many fewer shootings now, but still, they lead the city. And right across the board, every social distress is borne in these neighborhoods, including poor health outcomes and high unemployment. So we’re seeing the durability of place.

There are community groups who have the slogan, “Nothing stops a bullet like a job.” And in fact they’re exactly right. Our problem is it doesn’t feel like immediate action. One of the great attractions, I think, for elected officials and for residents of sending in the police is it feels like something is being done. We’ve seen over and over again; that can’t be the only answer. And we have such incredibly good evidence about what else stops crime right now, not in 20 years, but right now. Turning on the lights reduces crime. Summer youth employment reduces crime.