Organizers were offering rides and information about how to make a plan to vote Tuesday in a state with high-profile races for Senate, governor and state legislature.

By Barbara Rodriguez, The 19th

This story was originally published by The 19th 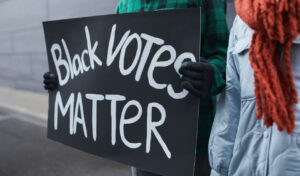 ATLANTA — On Friday, the last day of early voting in Georgia, Helen Butler hopped on a bright purple bus with organizers and headed 90 miles south of Atlanta to Macon, a city of about 150,000 residents, just over half of whom are Black.

Butler, executive director of the Georgia Coalition for the People’s Agenda — a nonpartisan organization focused on registering people of color to vote — stood outside the bus in Macon handing out voter guides and asking people if they had voted yet. She offered rides to the polls, a service her group will continue to offer on Election Day.

If people told Butler they did not plan to vote, she’d launch into her fine-tuned pitch: how voting ensures people’s voices matter, how voting helps address issues like wage inequality, how voting is an opportunity for changes to the status quo.

Every time someone changed their mind, it was a victory for Butler, a well-known voting rights activist in Georgia.

“It was really a fulfilling day, to be out with our people on the bus and to really get people engaged,” Butler, 73, told The 19th.

Black women like Butler have long been a powerful force in get-out-the-vote efforts in Georgia. That remained true during early voting this year as they helped set a record for a midterm year: More than 2.5 million votes were cast by Friday when early voting ended, according to the secretary of state’s office.

Black women lead organizations all over the state aimed at voter engagement and turnout, and they do behind-the-scenes work that gets people to the polls. That has been especially true during the state’s three weeks of early voting this year. Midterm elections typically have lower voter turnout than a presidential year, and in Georgia, it will be one of the first to test new rules following a 2021 law that restricted absentee voting and revamped how elections are overseen.

Yterenickia “YT” Bell is senior adviser of voting for the Leadership Conference on Civil and Human Rights, the oldest civil rights coalition in the country. She said over several weeks, she has encouraged people to vote early to address any challenges that may emerge with absentee voting or other challenges to voters. She said Black women are critical to that work.

“Black women have been the backbone of democracy,” said Bell, who is also on the Clarkston City Council, which serves a city of about 14,000 just northeast of Atlanta. “History shows us that we’ve always been engaged, even if we were not prioritized and our rights were not restored in the same way as others.”

U.S. Rep. Nikema Williams said Black women have been “the core” of justice movements, including the civil rights movement — in part because of their work to get people to vote. Williams, currently chair of the Georgia Democratic Party, was arrested at the Georgia Capitol in 2018 while protesting in support of voting access as a state lawmaker. She later was elected to the U.S. House seat formerly held by civil rights leader John Lewis.

Williams said Black women are also excited to vote for Stacey Abrams, who is challenging Gov. Brian Kemp and could become the first Black woman elected governor in the country. Abrams is credited with helping President Joe Biden become the first Democratic presidential candidate to win Georgia in 28 years and boosting two Democratic Senate candidates to wins in 2021 runoffs. She continues to make get-out-the-vote efforts and voting access key issues in her campaign following her 2018 loss.

Organizers on the ground say credit for the expanded electorate in Georgia is spread out among various activists and organizations in a state that’s pretty evenly divided on partisan lines. And while many of the organizers identify as Democrats, their message often is for people to simply get out and vote.

“We have continued to show up in high numbers and turn out for elections,” said Williams, who represents the Atlanta area and is seeking reelection on Tuesday. “… I am not at all surprised that you will see a lot of Black women leading the charge when it comes to organizing, getting people out to vote and reminding them about what’s at stake in this election cycle.”

Butler has no doubt that Black women contributed to the record early voting turnout seen in Georgia, in a year where voters have a number of high-stakes races on the ballot: for a U.S. Senate seat, for governor and for other statewide offices, as well as state legislative seats. Their choices will impact everything from the future of abortion access to wage equity and voting rights.

“We always say Black women take the community with them to the polls. They fight for not just themselves, but their family, their neighbors and for the community as a whole,” Butler said. “Black women are leading in trying to get people organized to turn out the vote, to understand why voting matters.”

Voters are also facing challenges to their voter registrations, under a provision of the same law that has election officials reviewing unlimited complaints in the final stretch of the election.

“It’s disheartening, to be honest,” said Bell, who noted she’s encouraged her constituents to call her personal cell with any questions or concerns about voting access. Just a few had done so as of Sunday. “But it also motivates people. Because if this was not something that was so critical, then why would they work so hard in order to create these barriers and these challenging circumstances to reduce people being able to have their voices heard? So that in itself is motivation for a lot of Black and Brown folks that I’ve spoken to, and myself included.”

Bell, who spent her weekend phone banking, recommended that people make a plan to vote. If they have already voted, she said, they should reach out to family and friends to make sure they have a voting plan.

“Ask them ‘What are your plans to vote? What time are you going to vote?’ and hold those people accountable,” she said.

Williams traveled around the Atlanta metro area over the weekend meeting with community leaders and constituents. On Friday, she helped host a group of voting rights leaders to discuss strategy for voter engagement on Election Day.

“I have a little 7-year-old son. Every time I go to vote, I’m voting for the future that I want for him,” she said. “And so think about those issues in your life that matter most to you and who do you want representing you? Whether it is at the national level or the state level or the local level, we have an obligation to make sure that we’re putting leaders in office that will look out for all of us.”

Butler offered her own list to voters in Georgia and elsewhere: Check if you’re an active voter. If you’re in line to vote and the deadline to vote passes, stay in line. If someone challenges your ability to vote, check to see if you can vote by provisional ballot. If you need a ride in Georgia, call her group. Butler also recommended anyone in the country to call the Election Protection Hotline at 866-OUR-VOTE (866-687-8683) — a nonpartisan toll-free number — if the person has a voting accessibility question or is experiencing a problem at their polling site.

Butler spent the rest of her weekend on the bus, getting more voter guides in people’s hands while out in Augusta on Saturday, then going to a church service and door knocking in Albany on Sunday.

The days have been long, but she’s prepared for more work after Tuesday if any key races head into a runoff.

For Butler, organizing for voting is personal. She was among the first groups of Black students allowed to attend the University of Georgia in the 1960s after Charlayne Hunter and Hamilton Holmes became the first two Black students to enroll at the university.

Butler later worked with the Rev. Joseph Lowery, a key civil rights leader who founded the Georgia Coalition for the People’s Agenda. He died in 2020 at age 98 and was active in civil rights work until the end of his life.

“I understand what voting rights mean,” Butler said, then added of Lowery: “If he could work to the day he died, I certainly can do the same.”