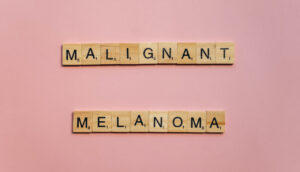 Yes, Black is beautiful. And as much as Black people take pride in their skin and skin care, the truth is there’s a much more indiscriminate health problem than breast cancer, which I share last week. Breast cancer is the second leading cause of death among women in the U.S., but skin cancer tops the list.

There’s a common misconception in the Black community that we don’t need to wear sunscreen. This is not correct. While it is true that people with lighter skin tones are more susceptible to skin cancer then people with darker skin due to the lack of melanin, people  with dark skin are still at risk. To understand how dark skin is still susceptible to skin cancer, it’s best to start with explaining what melanin is and how it works.

For starters, skin is the largest organ on the human body. The epidermis is the top layer of the skin cell, which we can see with our eyes. The bottom layer, melanocytes are produced below the epidermis. This is where melanocytes store and produce melanin. The more active the melanocytes are, the darker a person’s skin tone will be. Melanin helps to protect the dermis which, is the layer below the epidermis, to prevent skin damage by absorbing UV radiation in sunlight before it reaches and damages the most important part of the cells called the cells nucleus.

The misconception that Blacks don’t need sunscreen has contributed to skin cancer diagnoses. Studies have shown that Black women were significantly less likely to protect their face or other exposed parts of their body with sunscreen than white women due in part by the notion that sunscreen was not needed for skin that didn’t tend to sunburn like people of color. This is a myth — people of color can sunburn and also even slight tan after sun exposure, which is a sign your skin has been injured.

It’s true that melanin does offer some protection from the sun by absorbing or deflecting harmful ultraviolet (UV) rays, but it’s not enough to completely fend off the threat of skin cancer, no matter the skin color.

Skin cancer is a threat for any race or ethnicity, but studies showed that Black people had the lowest rates of skin cancer diagnoses. However, they were also more likely to be diagnosed at a later stage, and have a lower survival rate. Studies showed in a 5 year study that whites had a 90% survival rate compared to black that had a 60% survival rate. This can be due to many factors. One factor is that Black people are more susceptible to be diagnosed with the least common subtype of skin cancer, known as acral lentiginous melanoma. This kind of melanoma shows up in unexpected places, like the soles of the feet, palms of the hands, and under the nails. Famous musician Bob Marley, died from acral lentiginous melanoma that started in his toe nail. This type of melanoma is sometimes not diagnosed as quickly as other forms of cancer because of the atypical places it occurs, which is one reason why Black people are more likely to be diagnosed with this type of skin cancer at a later stage.

You might say Black don’t crack, so why protect the skin from wrinkles? It’s true that the more melanin a person has the more protection against both skin cancer and wrinkles, this is why people of color tend to have less wrinkles, but that does not prevent them from wrinkling nor from getting skin cancer. An extra layer of protection doesn’t hurt from possibly slowing the wrinkling process. Another benefit is that people of color tend to hyperpigmentation more, and sunscreen added protection so that the skin is not further damaged.

With that said, here are some suggestions to protect darker skin tones.

Skin cancer, like breast cancer, doesn’t discriminate. And yes, Black people are strong, but our skin can bruise as much as anyone else’s. It’s important for everyone to be mindful of what can harm their bodies — and that includes bad advice. It’s time we drop harmful urban myths and for the Black community as a whole to realize that as beautiful as our skin is, it needs to be protected just as much as everyone else’s skin.