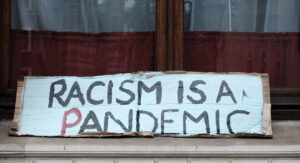 Believe it or not, once upon a time, right-wing media giants like Fox News actually exercised some restraint when covering news about crimes involving Black suspects. But post Trump-era, the masks have come off — and Black suspects are the soup du jour served up daily.

Unfortunately, too many people stuck in their corner of racist White America can’t help but lap up the racially-tinged news Fox News spews out everyday. God help you if you are brave enough to risk your sanity by reading the comments section on these stories — an apropos term for what these articles are. There’s no attempt to moderate the racism there — and that’s no accident. Racism equals engagement in the nonsensical internet generation we’re living in. Perhaps on some level it makes sense — what else will fill the extremists vacuum? What else will there audience have to bash with abhorrent commentary? Sure, the “liberals” get a spot on the menu, but targeting democrats isn’t enough for them — it would be like serving bread without butter.

There’s something disturbing about the generational issue of anti-Black racism in America that continues to fester. America’s racists have always wanted an “excuse,” if you will, to aim their vitriol at Black Americans. As crimes perpetuated by people of color increase, the finger-pointing and judgment at the Black community becomes incessant in right-wing media. (Violent crimes committed by White people are largely ignored unless they’re so egregious corporate media can’t ignore them.)

None of that may comes as a shock but the most telling part of this quandary is something Republicans don’t want to acknowledge: Blacks are more likely to be victims of violent crimes than perpetrators.

FBI statistics from 2020 show Black people accounted for 54.4% of homicides. Blacks were also 32.7% of the victims of violent crimes in the U.S. Not only that, the most recent FBI statistics indicate Blacks are more likely the bigger victims of hate crimes than any other racial group — and the stats continue to rise. And on another note, in some cities, like St. Louis for example, Blacks are 2.5 times more likely than Whites to be victims of crimes.

This truth doesn’t fit their narrative, and the vacuum apparently has no room for the countless Black Americans who suffer from crimes not just at the hands of Black people in their communities, but yes, White people as well.

This month’s story of a White woman in Tennessee — and heiress, at that — who was abducted while jogging and murdered, was all over the media — not just Fox News. They glossed over pictures of the blond mother/teacher in a seemingly perfect looking “All-American” family. The media knew she would resonate — and they were right. When a suspect was arrested and publicized by local authorities, his Black face set off a firestorm of racism online. But just this past week, a story came to light about a Black woman who accused the same suspect of rape, and alleged that police dropped the ball on an investigation after she not only reported the alleged rape, but gave police details about the suspect and sought medical attention, which included a rape kit. She filed a lawsuit this week that alleged police didn’t properly  investigate her case, which could have put this man behind bars, and prevented the horrific kidnapping and murder that happened later.

Law enforcement failed a Black woman, and the media would have done the same with prior knowledge, as many of them are doing now.

And she’s not the only case, because this isn’t an outlier.

Last week, a White woman in Florida was sentenced to four years in prison in connection with the deaths of four Black women after she killed in them in a suspected DUI case. She received a slap on the wrist after coming to a plea agreement with a very lax prosecutor and judge in the case.

As much as these cases should be a reflection point for the media at large, I don’t expect the strategy of using Black faces for clickbait and ratings to cease anytime soon. Republicans have announced crime as number 4 priority on their agenda — and we know which skin color will dominate the conversation. Fox News is the Republican propaganda machine, so I have no doubt this “priority” of tackling crime won’t be conveyed on Fox News — and the other two lying news franchises.

Truth: it’s the main tenant of journalism, but corporate media has commodified information, and distorted it for entertainment value and political gain. The Black community — and our allies — need to continue to call out the blatant racism and racial disparities in right-wing news coverage.

We deserve to be humanized, not vilified. Try digesting that, Fox News.