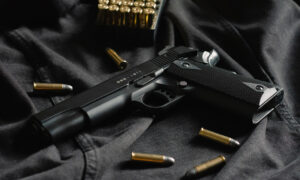 The most recent death of a mainstream rapper reminds me of how insidious the music industry has become, and it didn’t happen overnight. It has many shades of the crack epidemic of the 1980s with a much broader reach, killing Blacks everyday across America and leading to mass incarceration.

Much like crack cocaine was slipped into Black communities at the hands of White institutions , which birthed street gangs and widespread drug addiction, the same can be said of the music industry that has reaped billion-dollar profits convincing young Black kids that violent robberies, greed, gratuitous sex and misogyny are the name of the game to get ahead. And the dealers, like the crack epidemic of the 80s, are Black, except the profit margins are higher and adulation are the norm.

Rapper “Takeoff,” whose real name was Kirsnick Khari Ball, was killed last week at a bowling alley in Houston. He is the latest victim of gun violence which has claimed the life of someone in the hip-hop music industry. While the circumstances of his death are still under investigation, there are some respected artists asking the questions we Black Americans need to be asking. Last week, Chuck D of Public Enemy, condemned the shooting. He also said deadly violence in hip-hop has become normalized and gone ignored for too long.

Because I’ve tuned out of mainstream rap a long time ago, I had to do my diligence as a journalist to confirm these negative images are still a reality. I logged onto WorldStar (go figure) and the first video I saw were rowdy young Black men jockeying for camera time, flashing gang signs, middle fingers and emulating gunfire. If you dare drain your IQ watching, turn the audio off and ask yourself where they got these ideas from.

This new normal of chasing “a bag” at all costs — including the loss of life — is a cancer that has metastasized for 30 years. It’s the spawn of “gangsta rap” that has built household recognition for people who adopt names in the ironic vanity of doctors, dogs, and ice — and has gone unchecked for so long that Blacks mistakenly think this is our identity.

The gaudy gold chains with matching teeth, graffiti faces and crass language has earned the admiration of Black juveniles who rather spend their days arguing with each other about which rapper deserves the most accolades. If I had a dime for every impassioned argument I overheard about this nonsense, I’d be as wealthy as the people they put on a pedestal. And if these kids put a fraction of the energy into learning who we are as a culture and where we come from, we’d be a wealthier community as a whole, not just monetarily.

Pardon my criticism if it sounds as if I’m wagging my finger, but this isn’t the first time I’ve raged against this issue. I’ve written before about how the messages pumping out of speakers on rotation can influence the (poor) choices at-risk youth make, especially when they are on rotation every day. It’s frustrating to hear Black people defend this as “artistry.” It isn’t. But any given day, these people toggle between claiming they are projecting their so-called real-life experiences or fictional art, depending on which is more convenient.

Our communities need to wake up and elevate true artistry that isn’t holding us down. Our communities have not benefitted since the embrace of mainstream rap — the violence in our communities is more chaotic than ever.

For those who want to point to rappers as pillars of their communities when they need the press, it needs to be said (again) that rappers (like celebrities) are self-sustaining enterprises. They can be just as bad as corporations. They seldom do community service without a camera present, and only donate to communities as necessary because when you make money in those industries off the backs of the people, you can’t appear to just be a “taker.” But many times, the money they give isn’t even their money to give, it’s a behind the scenes deal with a brand or company they are involved with. Forget about most of the non-profit foundations they create, it’s an ounce of good dumped into a cesspool of degeneration. It’s like a cycle of waging war to establish peace. It makes no sense.

The problem with today’s mainstream rap comes from many sources, and as usual, the people have to use their voices to put this behind us. Not all Black people find the negative messages in mainstream rap acceptable, yet we accept it.

Black America is overdue in acknowledging the gun is in our hands too. We need to disarm the industries killing us, otherwise we are playing a part in a mass murder-suicide no other race is known for committing.