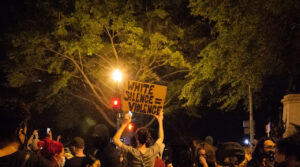 Infamy used to be bad thing. Tarnishing your reputation meant a lifelong fallout you may not bounce back from. When we were young, it was a stamp of disapproval we wanted to avoid.

Remember that guy in school who did just about anything outrageous or disrespectful in pursuit of feeding his hunger for attention at everyone else’s expense? The class clown, the bully, the troublemaker… the jerk. They grow up, but that doesn’t always mean they grow out of their childish behavior. We used to distance ourselves from them because we knew we didn’t want to share the same path with them that inevitably would lead to nowhere.

The antics we’ve seen in politics are an indication maturity isn’t promised with age. (Neither is civility, for that matter.) You can become leader of “the free world” and there are no repercussions for your misdeeds. It’s no wonder whether you’re high or low on the societal totem pole, whether you’re Trump or Joe Blow, you can stir up trouble and make a name for yourself. And the media — left, right and in between — will be your greatest ally.

We live in a world that protects racist, guilty teen murderers and offer them congressional internships. We’ll even pay money towards their Go Fund Me campaigns to ensure all of their needs are met thanks to the national press turning them into media darlings. And now, White supremacists that try to follow suit are receiving the same treatment thanks to mainstream media.

Thrusting White supremacy groups into the infamy machine maker is becoming a sickening norm in mainstream media. The latest example would be a White supremacy “organization” that tried to incite a riot when they traveled last weekend to a Pride event in Idaho. This once little-known group is now on the map thanks to exhaustive media coverage. While I understand it would be remiss for those outlets to not identify them, giving these groups profile coverage and feature stories is not a wise choice. They are a dime a dozen, and this level of coverage fuels their membership drives — and competition. It inspires wackos living in their mom’s basements (like at least one of the “men” arrested last weekend) to jumpstart their own racist cult.

It’s also very disconcerting to see how cautious mainstream media outlets are when they publish stories about indisputably racist crimes against Black victims. It’s nearly impossible to get producers to just call crimes what they are: racist. Instead, words like “bias” and “insensitive” are used to diminish the severity of the allegations. They placate their racist audiences — assuming the producers aren’t racist themselves.

Many mainstream TV stations, for example, are adept at pretending they care about racial progress until they are tested. I recall a situation at the last station I worked at when my manager didn’t want to mention in a social media post that a couple who brandished guns at BLM protestors was White. Her “logic” was the photo showed what race they were. She didn’t seem to comprehend that this context has to be framed since it was a racially-charged incident. It wasn’t the only issue working under this incredibly inept (and very green) manager, but it was a reminder how TV news stations will pull out all the stops when they see which direction the wind blows — until it stops. At the height of the George Floyd protests, ad money and sponsorships dollars were flowing as news media pledged to get on board with Corporate America’s unmaterialized promise to improve equity and inclusion for Black Americans. Getting producers who can competently, if not sensibly, cover race-related issues was the first sign this BS commitment was a flash in the pan.

Honesty is the main tenet of journalism. Advocacy has its place, but not every outlet is going to make a real commitment — not when race is involved, and especially not a local TV news station. But it’s interesting how mainstream outlets play a role in building these White supremacy monsters. They would rather call them “White nationalists” than White supremacists… and certainly take a cautious approach when labeling them racists, no matter how obvious it is to the average viewer.

America’s fight (depending which side you are on) against White supremacy seems like it is going to only be more difficult until the press can learn to be fair and balanced — and mindful!

Attention hogs, no matter their agenda, will take as much as they are given, and it’s about time the media put them on a diet before they spread more chaos.