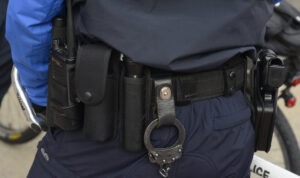 The former officer who killed 12-year-old Tamir Rice has reportedly withdrawn his application for a police job in a Pennsylvania town.

News of the man’s attempts to get a job began circulating earlier this week, drawing outrage nationwide. The man was sworn in earlier this week and a photo was posted on social media which started spreading on the internet.

Tamir Rice, a Black kid who was holding a toy gun, was fatally shot at his Ohio home in 2015.

If hired in the Pennsylvania town, the man would have reportedly also been promoted to police chief in about 90 days.

City officials who hired the man said they were not aware of his involvement in the death of Tamir Rice.

More about the cop’s attempt to find a police job can be found here.

Opinion: It should be as outrageous as it is predictable former officers like this will try to find another town to hire them. They story officials are giving about not knowing the controversial element about his background sounds like complete BS. They should feel embarrassed not doing a basic internet search on this man to find out who he is, if that’s true to begin with. It’s hard to believe they didn’t know, especially with no apology for they would have done. It’s a small, White town so it shouldn’t be shocking they don’t care about Black child killers. Thankfully they got the message.