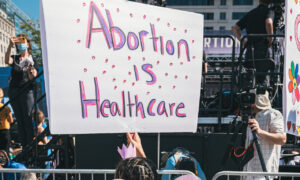 Louisiana’s strict abortion laws in the wake of the Supreme Court’s Roe v. Wade reversal has reportedly prevented Black woman from undergoing an abortion after she discovered her fetus has a fatal defect.

Nancy Davis woman said even though her baby was diagnosed with Acrania, which she discovered after reviewing an ultrasound, doctors have told her they will not be able to perform an abortion, reported NOLA.

Acrania is an unsurvivable condition in which part of a fetus’ skull is missing. The baby does not survive after birth more than a few days or weeks.

Louisiana is now among the most difficult states in the U.S. for women to receive an abortion. Exceptions include if a pregnancy endangers the life of the mother or the fetus has a fatal condition.

According to NOLA, Davis is being denied an abortion due to a gray area in Louisiana’s abortion laws. Currently, Acrania, is not on the state’s list of “medically-futile” conditions that permits an exception to abortions, even though babies do not survive with the condition.

More about the issue can be found here.