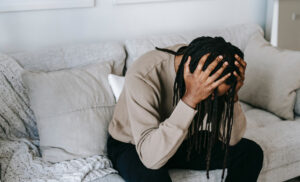 Sometimes prevailing wisdom falls in our lap when we least expect it. Years ago, a close colleague and myself would frequently visit two friends who were in their senior years. Our conversations ran the gamut but I always felt like I walked away from our lunches and dinners with a refreshing outtake on life that only people who have experienced more of it can offer. There were many takeaways from those chats, but one in particular stuck with me when Bradley said he even at his age, he is less concerned about losing his physical abilities and more concerned about losing his mind — without it, nothing else matters.

As we age, everything is prone to declining — and it’s unpleasant to consider having to choose what we are willing to sacrifice… assuming we have a choice in the later years of our lives, yet we make decisions at any age about which aspects of our health we will prioritize, or not, for that matter.

Black men have a long history of avoiding doctors and getting annual check ups — I’ve been there myself. But there is a more disturbing issue: we can often make the choice to prioritize our physical health when absolutely necessary but our mental health is something we bargain with. This is not a game we should play.

Per the National Alliance on Mental Illness:

According to the Health and Human Services Office of Minority Health, Black adults in the U.S. are more likely than white adults to report persistent symptoms of emotional distress, such as sadness and feeling like everything is an effort. Black adults living below the poverty line are more than twice as likely to report serious psychological distress than those with more financial security.

Despite the needs, only one in three Black adults with mental illness receive treatment.

Mental health isn’t just for people who have “mental illness,” it’s everyone. Almost anyone can experience anxiety or depression, and that in-turn not only affects our short-term happiness, but also our long-term physical health. Black people have increasingly gotten better at urging family and friends to seek the help of mental health professionals, especially when it’s obvious. Unfortunately, a stigma persists that a therapist is for “crazy people” and church is a better avenue to quietly try to rid ourselves of mental health issues. I couldn’t disagree more.

I’m reminded of this by recent stories dominating the news, centering around poor choices Black men have made — and continue to make, highlighting they are not playing with a full deck. This month, we’ve watched Kanye Mess fall off the rails and descend further into lunacy. Then there’s the Black man on trial for allegedly running over a crowd who is representing himself in court. It shows what can happen when you don’t get the help you need. I don’t know what resources the latter had at his disposal, but I’m a big believer that this day in age, if you consistently seek the help you need, even with obstacles, you will find it. (I don’t know what Mr. Mess’ excuse is — and I have a feeling neither do you.)

I started seeing a therapist to deal with Generalized Anxiety Disorder when I was in my 20s. I found the right therapist for me. She was Black, which I emphasized during my research, and she had an office near my house at the time. It was one of the best decisions I ever made. Dropping all of my unfiltered worries in her office for an hour left my body as light as a feather when our sessions concluded.

I understand my experience isn’t going to be the same as everyone else’s — no two people have the exact same issues. But what is universal is worrying, and Black Americans find plenty of it day to day.

Black Americans also have long suffered from generational pain. When we don’t tackle our unresolved traumas and let trusted people in, there is no room for growth, serenity or spiritual prosperity — but there is plenty of room for anger.

Our minds and our communities need healing, and it’s not going happen without advocating for ourselves and our needs. But we have to be vulnerable… we have to be human and say “I need help,” and take the first steps to getting it.

We live in a better era for discussing mental health than ever before. There are more resources available now, and often we don’t even have to leave the confines of our home to at least get the ball rolling.

I’m compelled to admit I believe Bradley was right all along: losing our minds is worse than losing the functions of our bodies. But if you cast your worries to mental health professionals, you’ll be surprised just how much you can gain.