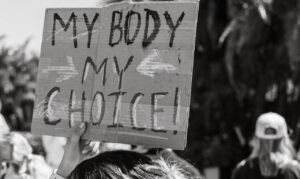 The former tangerine in command once infamously said that when you get famous (powerful) you can do anything to women, even “grab em by the pussy.” Yeah, the Trumpkin eloquently stated a man can have his way with a woman’s vagina if he ascends to power — and his warped ideology has reared its ugly blond head in today’s somber, historic moment.

Unless you have been living under a boulder, Roe v. Wade is no more. I’ll cut to the chase: no justice on the Supreme Court is a genuine “pro-lifer.” Today’s reversal of the long-upheld Roe v. Wade is a disingenuous gift to the morally-bankrupt, right-wing evangelicals, also known as hypocrites. It’s a coo to GOP extremists who want to send a signal that they can be disruptive — they can hurt so-called liberals. It was meant to rally the base, and it will. Let’s be honest, if these purported Christians really gave a damn about morality, anti-racism would have been at the top of their agenda a long time ago.

I can spread the blame but today it won’t be the SCOTUS, or phony “Christians” … not even the Trump Party formerly known as the GOP. Black America played a big hand.

My criticism isn’t new, I’ve been quite vocal about the reverberation Black absenteeism has had on U.S. politics. Black voters, even witnessing Trump in his most vile element on the campaign trail, allowed him to slide to victory in battleground states like Michigan because they didn’t show up at the polls in 2016. The domino effect of his election came to pass. Black leaders warned Black voters, Black media warned Black voters, and Trump accompanied by his GOP cronies warned Black America what the future held if a Trump administration came to fruition. And when it happened, it was worse, from my point of view, than anyone could have imagined. He turned up the heat and fanned the flames in unimaginable ways with his fascist rhetoric, creating a new generation of racists that we Blacks will contend with for decades because older generations have been emboldened.

The topic of apathy came up when Falisha and I were discussing this morning what we wanted to say about Roe v. Wade in the wake of today’s announcement — which everyone in tune with news saw coming. I’m gay and I can’t get pregnant so I have limited skin in this game, but Roe v. Wade is just the beginning of the SCOTUS clock winding backwards because of the right-leaning justices… especially senior justice Uncle Tom. Before she wrote her column on Roe v. Wade, Falisha said she recently found herself in one of the often hair-pulling debates with a young man who said voting does nothing. To him, and his unmotivated brethren, I say “tell that to Republicans.” Apparently, there are too many Black Americans with the power to vote who continue to take it for granted. It’s not my intent to wag my finger or brush broad strokes about Black Gen Z, but there is a real issue with young voters not participating in the most important right they can exercise as an American. Life here can be worse. The conditions can get harder, and a protest isn’t necessarily going to be the answer when they do finally feel the heat.

Abortion bans will disproportionately affect Black women, and that indirectly (or directly depending on his involvement) affects Black men. With high mortality rates and dire stats on Black maternal health, this is one area Blacks will clearly be hurting. It won’t be White women, for example, who can afford a ticket to a well-vetted doctor of her choice in a blue state like here in California. Pregnant Black women will have fewer options, fewer resources and a heavy burden if they cannot access abortions.

When I hear discussions about Black people sitting out the upcoming November election (and 2024 presidential) I can’t help but hold hope it’s just empty chatter… would-be voters blowing off steam. Voter suppression is growing, and before our voting blocs are diminished, we have to take a stand.

What more do they have to take?